Trump just announced a travel ban on flights from Europe, which will go into effect on Friday March 13 at midnight EST for Continental Europe and Monday March 16 at midnight for UK and Ireland. Here is what we know so far:

The full briefing can be found at this link and anywhere online for that matter.

During the conference there was not much discussion about how the government will battle the disease at home. While travel bans and isolationist policies are almost inescapable at this point, with the fast spread of disease, there is no doubt that the U.S lags behind all other countries in testing for Coronavirus. Just look at the available COVID-19 tests per million people. Even British Columbia (a province in Canada) appears on the list higher than the United States: 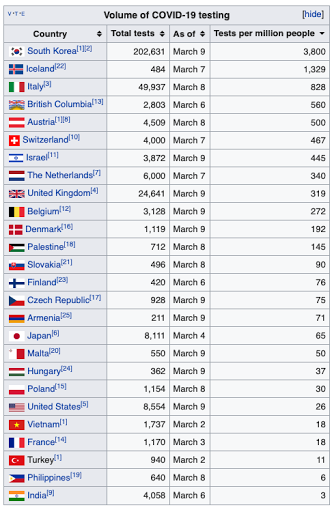 Having said this, this press release from the White House really brings up a lot of questions (these are just a few off the top of my head):

Over the past 24 hours we have seen India, Kuwait, and Qatar shut down their borders to foreigners. Let’s not forget that all of Italy is under quarantine. We are truly entering unprecedented times and the leadership and response from the US government has been lackluster at best so far.

What are your thoughts regarding the ban? What will the European response be like?