Researchers from Science magazine have intentionally lost over 17,000 wallets in over 25 different countries to test where you are less likely to be a victim of petty crimes. The results are not exactly what you would think.

Switzerland is the country, where you are least likely to lose your wallet, topping yet another metric. One more reason for it to be my favorite country in the world (sorry America). So don’t be too worried about getting distracted by that wonderful Swiss scenery.

The study (which I read about this morning on Gizmodo) indicated that neither Americans nor the British are really the most gracious with returning wallets to their owners. Both countries returned wallets with cash less than 65% of the time. This pretty much put the pair in the middle of the pack, while Switzerland, Netherlands, and various Scandinavian countries ended up at the top. These countries had a high rate (over 80%) of returning wallets even in circumstances where there was no cash in them.

Interestingly enough the study saw that India (which has one of the highest income disparities) fared better than China, the UAE, and Malaysia. Japan and South Korea were left off from the study. This is a complete bummer because I would expect Japan to top this metric every-time. 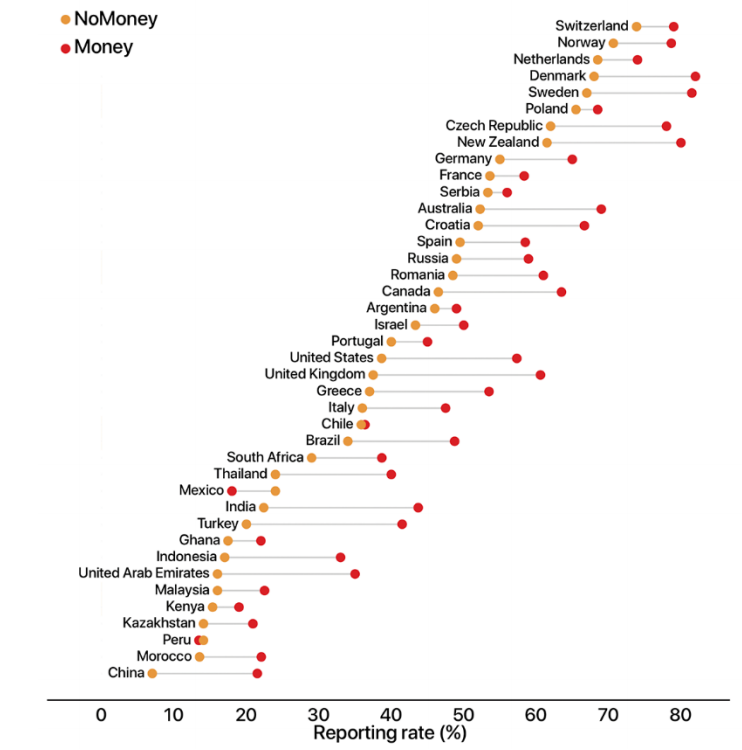 Something I noticed about the study was that it was more or less in direct correlation with the Human Development Index (HDI) and GINI Coefficient ratings. Countries with high income inequality or relatively low HDI, tended to be lower on the rankings (at least roughly so) The study (which I read about this morning on Gizmodo) was conducted by losing a large set of see through wallets containing $13.45 worth of local currency, business cards with full contact information, a key, and a grocery list. Researchers went around the world and lost wallets in 50+ cities (sounds like the ideal job right?).

Here are the various test groups they used in each place:

*In the United States, UK, and Poland, the cash amounts were raised to $93 or so in local currency.

From these tests they concluded the following:

Of course Switzerland and Scandinavia would top this list. After all, the citizens in those countries are probably well off and they probably couldn’t do much with 14 or so odd dollars anyway given how expensive it is to live there. However, it was interesting to note that Japan and South Korea were left out of the study. I bet I could lose an empty wallet, lie about having cash in it, and have a Japanese person take money out of their own wallet because of how sorry they felt. That’s how nice they are. Of course, you would be a sorry human being for taking advantage of people like that. The U.S certainly has a long way to go in lessons of morality….